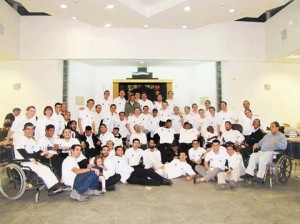 Shabbos is always special but recently Shabbos in Yeshivas Birkat Moshe was extra special. Extremely grateful for the gifts Hashem has given them, they have decided to share those gifts with Hashem’s special children. For the second time, they have invited the members of Ezer Mizion’s Matan Club for Young Adults with Special Needs to join them for a Shabbos. With maturity that belied their years, the Yeshiva students took complete responsibility for every detail. Each Ezer Mizion boy was assigned a dorm room where he roomed with Yeshiva students, sharing their conversation, their thoughts, their jokes. For an intelligent but speech-impaired, wheelchair-bound young man afflicted with CP, this alone was a heavenly taste of normalcy.  But there was so much more. The Ezer Mizion boys joined the Yeshiva boys at the Shabbos meals where their physical needs were cared for with sensitivity and respect as each boy was helped to eat the delicious Shabbos food. The singing was super-enthusiastic with the arms of the Yeshiva boys around the shoulders of their guests as they swayed together to the timeless Shabbos songs. The Ezer Mizion boys- who learn Torah regularly at their Ezer Mizion groups- felt right at home listening to the insightful Torah thoughts. It brought home the concept that the Torah belongs to every Jew, regardless of the tools he has been given in this world.

Davening was another challenge but the yeshiva students met it with aplomb. The Ezer Mizion guests were not relegated to the ‘audience’ but, instead, became an integral part of the Torah Reading. A Yeshiva student removed the Sefer Torah from the Aron Hakodesh and gave it to a wheelchair-bound Ezer Mizion boy to hold. Both boy- his face aglow-  and Sefer Torah were then wheeled to the bima where the Torah was lifted to its proper place. As is commonly done in all shuls, a guest is given an Aliyah. This simple procedure was far from simple on this memorable Shabbos but difficult logistics would not hold back these determined yeshiva students. Two Ezer Mizion guests were called up together. One was able to speak and make the bracha ‘for both of them’. When the Aliyah was completed, a spirited- as only Yeshiva bachurim know how to do-  Misheberech was made for the two. And so it went. The joy on the faces of the Ezer Mizion guests was matched only by the joy on the faces of the givers.

The Shabbaton was attended by the Ezer Mizion counselors and their families who could not hold back their tears in witnessing such an uplifting Shabbos. They understood that their charges will now return to their learning and activities at Ezer Mizion with renewed strength, feeling themselves to be a fundamental part of the Jewish Nation.