The Lego Club at Oranit, under the dedicated direction of Maor Cohen, or, as the children call him, “the Lego man,” has become a well-known entity. 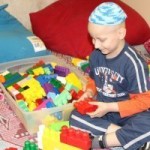 In honor of Pesach, the club held a special session: Maor rallied friends and donors to sponsor a Lego set as an Afikomen present for each family at Ezer Mizion’s cancer patient guest home that has a family member with cancer.
After two hours during which the families enjoyed working together building Lego creations, three super-size Lego sets were raffled off. The remaining families also received a Lego set as a Pesach Afikomen gift.
The father of Tomer, a young boy who was just recently diagnosed with cancer, said that they had not yet had a chance to participate in the Lego workshop that takes place every week, but when they heard about the special Lego event, they planned to come.
Unfortunately, Tomer was hospitalized, but since they did not want to forfeit the event, they asked the doctor permission to leave the hospital and go to Oranit for just a few hours, 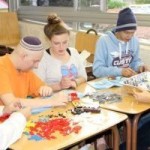 a request that was possible only because Oranit is so near to the hospital.
Tomer’s broad smile and obvious enjoyment could be seen even past the protective mask he had to wear throughout the event.
Thank you to Maor and his friends, whose efforts made the event a smashing success!