Last week I was at the Ezer Mizion summer retreat for kids with CP. There aren’t too many fun things that I can do and I really look forward to Ezer Mizion’s fun days throughout the year. 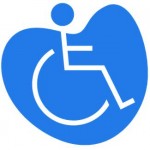 I’m a teenager like any other teenager. I love to do exciting things, share good times with friends and all that. Inside I’m just like everyone else. I have opinions, I get mad and I love a good ball game. There’s just one problem. You guessed it-the CP. It holds me back from doing all the things regular teens do. But Ezer Mizion sets up these trips just for people like me. I can do all the activities and boy, are they great activities. As soon as one retreat is over, I start dreaming about the next one.
This year they moved the location of the summer camp to the Nechalim Yeshiva campus in Moshav Nechalim. The truth is, I was a little nervous, because I’m not familiar with the place. In Kefar Saba, I already knew every corner and remembered exactly which spots were right for me there. Here, I didn’t know anything and I couldn’t guess what awaited me. Well, it turned out fine.  All in all, I liked the new campus very much, because the entire area was flat and I could get around with the wheelchair on my own.
After I got to know Mordechai, the counselor, we went to the auditorium to see an acrobatic show, like at the circus.  That was just the beginning. After them, there was a performance by the terrific Lipa Schmeltzer. 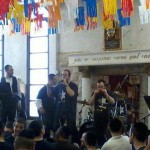 Wow! He’s really something!
Since I was a kid, I keep hearing about amusement parks from everyone I know. Some kids have been to so many that they can write an article for Consumer Reports comparing the roller coasters at each one. They’re always talking about it, especially right after chol hamoed or summer vacation. They don’t mean to be mean. They just don’t realize that I can never go to those places. Well,I shouldn’t say never. Ezer Mizion seems to make the impossible happen lots of times.  On the second day, we went to Superland Amusement Park in Rishon Lezion. I went on the bumper cars, the cable car, and the inner tubes. Fantastic!!!!
We returned to Nechalim and got ready for Shabbat. The tefillah was wonderful and so was the meal that followed. The feeling in that dining hall was one that I’ll take with me and enjoy for months to come.  The togetherness. The heartfelt singing. Each one of us felt part of something big. Part of Am Yisroel-CP and all. 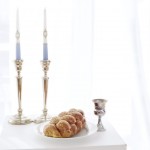 On Sunday, the police arrived. No, we hadn’t done anything wrong. It was pure fun— to show us how things work at the police force. They came with horses, motorcycles, and a robot, and patiently explained all the things the police do. They lifted me onto a jeep and I- Menachem Weiss- sat behind the wheel.
Later in the afternoon, we made a Lag B’omer bonfire. There were klezmer musicians and we sang songs of Meron late, late, late into the night. (I hope my mother isn’t reading this.)
A trip to the Kotel is often part of an Ezer Mizion retreat. The gas fueled the bus and songs fueled our spirits as we traveled. Rabbi Yitzchak Ezrachi, Rosh Yeshiva of the Mir Yeshiva, spoke at the Kotel. That made us feel very important. Imagine, the Rosh Yeshiva of such a large institution took time out to speak to us. Then we went up to the Kotel for Minchah and to offer personal prayers.
Another day featured, the absolutely greatest of the great, the giant of Jewish music, Avraham Fried! 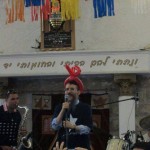 All told, I had a very good time this year. My counselor, Mordechai, was terrific. We got along excellently and I hope that next year he will again agree to be my counselor. This is my chance to give him a huge “thank you.”  I hope I didn’t make life too hard for you!
And of course, a great big thanks to Ezer Mizion for all their effort and organization. Thank you to the coordinators and the counselors, and b’ezrat Hashem – see you next year!
Until next time,
Menachem Weiss


Menachem Weiss, a “special” teen, reports every week to Merkaz Ha’inyanim on an angle of life that he alone can talk about