Uri’s favorite activity is not languishing in a hospital, away from all his friends, missing out on the day-to-day fun that comprise a young boy’s life. Uncomfortable treatments and scary machines did nothing to make his stay more enjoyable.  But the monster named Cancer that had recently entered his young life did not ask him if he wanted to undergo a long hospitalization period. Uri was a trouper and bravely tried to ride out the months with a minimum of complaining. 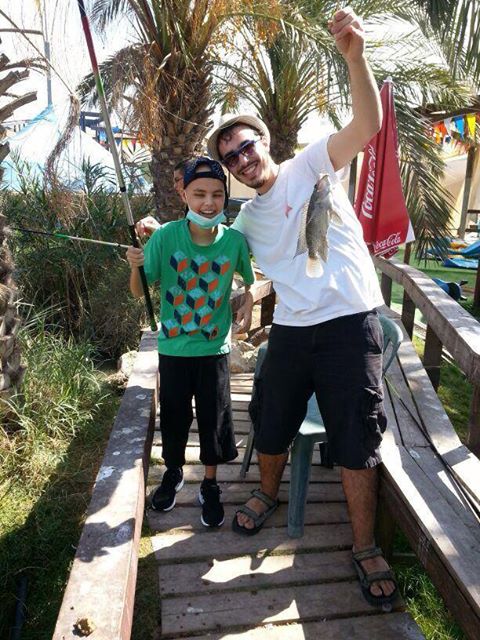 And then it was over. Uri was released. With a congratulatory handshake, the staff at Ezer Mizion’s Home for Children with Cancer rejoiced with Uri and offered him a medal for bravery in the form of any trip of his choice. “Fishing,” shouted the newly released prisoner.  And a fishing trip it was.  How do you like his catch? And how about the grin on his young face…almost as big as the  ‘giant fish that got away’.
Ezer Mizion’s Donald Berman Rehabilitation Center provides professional therapy for children with cancer using the most up-to-date techniques including sand play, music therapy and  animal therapy. In keeping with the medically accepted concept of emotions having a great effect on the body’s ability to  fight disease, fun days, parties and trips are an integral part of Ezer Mizion’s services. For a five year old, it may be a day as an ‘assistant policeman’ at a real police station, for a six year old musically- inclined incipient radio star, it may be an opportunity to sing on a real radio show. For some, a plane ride or a trip to a lego demonstration. Ezer Mizion leaves no stone unturned to bring joy to its young patients.  Ezer Mizion: where Dreamotherapy partners with Chemotherapy in the battle for life. L’chaim!