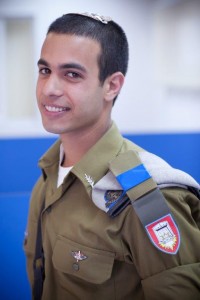 It was a long, exhausting day. A little prick in the finger hardly registered with Yehudah as he went through all the red tape of his army induction. The prick had long healed when a call came in during his commander course. “I was needed to save a life. It wasn’t the kind of call you receive every day. I consulted with my Rav who advised me to do whatever is necessary. The life of another Jew was at stake. I was the only one in the entire world who was a genetic match to this person. My bone marrow would save him. It was all up to me.
But it still wasn’t real.
A year later, I received another call saying that the recipient wanted to meet me. That’s when it became real. There was a person on the other end. Suddenly, these moments at the clinic last year took on a face and a name and a family and dreams.
The recipient was Itai Chanan from Herzliya who discovered that he had blood cancer. “One day I came home with a sort of wound near my forehead, and on Shabbat morning, I woke up with a red, swollen face. Abba rushed me to the hospital. It was there that I heard that word: leukemia. It seemed as if it’s a bad video that will be over soon. At first it was like a party. Everyone came to visit me– until suddenly, I grasped what was going on and then came the big shock.”
After I completed the round of treatments, they told me I would need a bone marrow transplant and that one of the possible side-effects was… death. Now the ball was in my court – to decide whether or not to do it. But when they tell you that this is the only way to save your life, there isn’t much of a decision to make.
My sisters were not found to be compatible donors. Now what? After all, if my own siblings weren’t a match, how could a stranger’s DNA match?
I hadn’t counted on a miracle. One of the many Ezer Mizion miracles.
When the recovery period was over, I returned to life, step by step. There is a period of time roughly defined as ‘a hundred days of recovery.’
“A year after the transplant, Ezer Mizion asked me if I would like to meet the donor. We are both at a similar point in life, and the encounter was …was…I really have no words to describe it.” 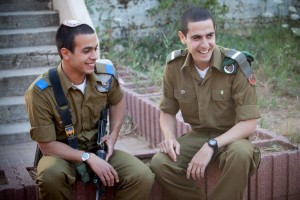 Yehudah agrees. “It was a very moving meeting. His father gave me a hug that is has become part of my very being to this day. No matter how I would describe the power of that embrace, it would only minimize what I felt at that moment.”
“I am married, “ continues Itai.”and the father of a one-year-old. Sometimes I look around and think— all that would never have been if it weren’t for Yehudah.”

2 thoughts on “His Father’s Hug”