La’isha: Letter from the Editor
May 19, 2014
One Who Saves a Life
Cancer, I don’t have to tell you, is a serious and cursed illness. It is life-threatening, living with it is horrible, and the treatments are an indescribable nightmare.

That’s why we all were so horrified when a close and dear family member, Eli Stein, was diagnosed with leukemia two years ago. In one day, our lives turned over. From then on, every day became a battle for life that included countless hospitalizations, radiations, chemotherapy treatments. There were tough days, and there were tougher days.
At one point, Eli had to be in total isolation for weeks because his entire immune system had collapsed. The medications he was getting were so toxic that the nursing staff was not allowed to touch him or even the sheets he was lying on, because his body emitted dangerous toxins as a result of the chemicals he was getting. An absolute horror.
Several long months of physical and emotional torment elapsed. His loving wife Shuly ran around, from home to hospital and back, doing whatever she could to relieve his agony, if only a tiny bit. Everything was focused on one moment: the point when he would be able to undergo a bone marrow transplant, his only chance at life. The transplant itself was also dangerous, but since it was the only hope, we clutched at it and prayed that a matching donor would be found and that the transplant would succeed. The days of waiting were heavy with tension.

But the moment came when a donor was located and all the preparations were made. What excitement! Finally, a glint of light at the end of the tunnel! The day of the transplant itself also arrived, and again – nerves stretched to the limit. Two more weeks of terrible, unbearable back pains, while our hearts palpitated: Succeeded? Didn’t succeed? It takes time until the tests show that new blood is beginning to form. Only half a year later came the day when the test parameters indicated clearly that the leukemia was dead and that new blood was flowing through his arteries. The transplant was crowned a success. Imagine what ecstasy we felt, how we literally jumped for joy!
All this time we said: What we will we do when we meet the donor? Who is he? How does he look? We envisioned him in our minds. How do you thank the person who saved your life?
The identity of the donor may be revealed only a year or two after the transplant, and even then, only on condition that he agrees to the exposure. Just imagine what a thrill it was for us a month ago, when they informed us that there will be an encounter between the families of donors and recipients and our Eli will be among them.
There is a marvelous enterprise, an association of righteous, dedicated volunteers, called Ezer Mizion. They are the ones responsible for the tremendous Bone Marrow Donor Registry, and they are the ones who fund the stage of the initial compatibility test with private donations. This wonderful enterprise is in partnership with the IDF. Today, every conscript, on the day of induction, joins the Registry (all they need to do is give a simple saliva sample). 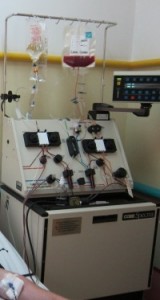 On that special day, at the Tel Hashomer Base, our Eli Stein and his wife Shuly (who is my husband’s enchanting sister) met the 22-year-old donor, Guy Waldman of Tivon and his family. The minute they told Guy that he was found to be a match, he did not hesitate for a second.
How was the meeting? You might be waiting for me to fill you in. But I can’t answer that question, because I stood there and just cried and cried. We all cried. So did all the other donors and recipients. One of the recipients was a four-year-old child. How can you not cry?
Unfortunately, I can’t sign up for the Registry anymore because I am past the age of 45. But I can help support the genetic testing of others who do sign up – is there a greater mitzvah than this?
Yours,
Orna Nener
Chief Editor