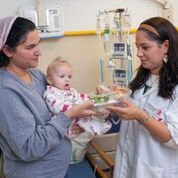 Nine hours! Can you imagine spending nine hours with five small, rambunctious children in a hospital setting with no supplies?! It’s the stuff of nightmares but it actually happened to a young mother who became worried about a medical issue in one of her kids and, having no place to leave them, ran out with the whole family to the hospital emergency room. The last thing on her mind was to pack food for herself and her brood and so there she was. Endless waiting with children who needed the comforts of their home. This test. That test. More waiting. Children climbing the walls. Literally. Lunchtime passed. As did suppertime. Hungry children do not make for good behavior. It became embarrassing. She understood the looks of her fellow ‘waiters’. “That mother doesn’t know how to discipline her kids!” 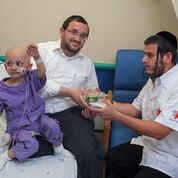 Mommy also had had nothing to eat since breakfast eons ago. She was worn out, frazzled and worried about her sick child who still had no diagnosis. And then she appeared. A Lottie’s Kitchen volunteer with an attractively packaged meal for Mommy and each of her children. The food was spiced with an encouraging pat on the shoulder, an understanding hug and a promise of snacks later on if they are still there. And there in the hospital emergency room, the sun shone once again. The children became calm and Mommy was strengthened. She felt that she could handle things once again. “Those Lottie’s Kitchen volunteers are angels,” smiled the elderly woman in the seat next to her who, only minutes before, had been glaring at the children and muttering under her breath. 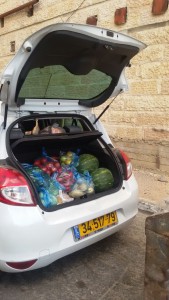 Yes, they are angels. Each one exudes a warmth, an enveloping comfort. They’ll listen, really listen, as the caretaker unloads her concerns. Often, they’ll have a bit of advice. Perhaps a suggestion to connect the family to another segment of Ezer Mizion’s services that will ease the burden: rides to the hospital, a volunteer to do homework with the children while Mommy is busy attending Grandma at the hospital, volunteers to create a Bar Mitzvah celebration which Mommy does not have the emotional stamina or the time to handle… Each Lottie’ s Kitchen volunteer tries her best but rarely fully understands the impact she makes on a family undergoing a crisis. Unless…
Lets call her Mindy. She volunteers for Lottie’s Kitchen once a week. One day she found herself on the other side of the tray cart. “I’m sorry. I have to cancel,” she told the coordinator. “My husband is sick. He’s hospitalized.” 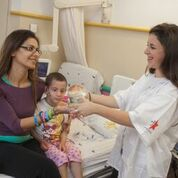 The coordinator heard the tension, the tears in her voice and noted the necessary information onto her daily roster. That afternoon, Mindy was visited by a fellow volunteer bearing a hot, nourishing meal and some encouraging words. And Mindy burst into tears. You don’t understand- I never understood- what it means to sit here hour after hour, so worried, so worn out and exhausted. The doctor had asked me to make a decision regarding a procedure and I felt so dizzy, I could hardly think. I haven’t had a normal meal in days. I just run home at night to spend a quick hour with my kids. 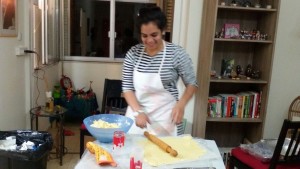 Then it’s back again at the hospital. Breakfast was a coke from the machine down the hall. Lunch I skipped. For supper last night I grabbed a yogurt as I was rushing out of the house plus a bag of chips to eat at the hospital. You can’t understand what this means. I want so much to take care of my husband but no one is taking care of me. The volunteer held her as she cried, emotionally spent. The next day, the scene repeated itself. Mindy was, once again, overcome with emotion at the sight of someone arriving to take care of her. For one month, Mindy spent almost all day with her husband and each day, as her strength would ebb and her spirits would fall, she would anticipate the daily visit with someone who really cares. Drained, beyond exhaustion, she cried each day using almost the same words: You don’t understand what this means! She could hardly wait to rejoin the volunteer force with a heightened concept of what she is giving to others. 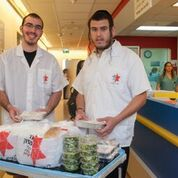 Giving is the name of the game. Volunteers search out ways to give. During one visit, a patient asked the hospital staff for a specific juice. Apologetically, they answered that it was unavailable. The adult in her understood that she would have to forego her favorite juice. But the child in her, so vociferous lately as she faced serious illness, felt saddened. She was fortunate that a Lottie’s Kitchen volunteer was in the room at the time. The volunteer leaped at the opportunity and drove to the nearest supermarket, braved the long lines and, juice in hand, triumphantly made her way back to the patient’s room. 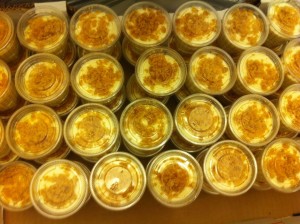 Lottie’s Kitchen volunteers. They are everywhere. In each hospital. In the emergency rooms, in all the wards. How? It’s because of all of you. This year Lottie’s Kitchen Event will be held on July 7 at the home of Frieda & Joey Franco in Deal NJ in loving memory of Manny Hamowy & Robin Ashkenazie.
See you there!