It’s hard work. Ditza is exhausted each day as she makes her way home, usually quite past her official hours. She needed a bit of encouragement to put some verve into her steps.  Recently that encouragement came in the form of two ‘notes from heaven’ showing how much Hashem values her efforts.
Ditza heads Ezer Mizion’s Lottie’s Kitchen in Israel which provides meals for families dealing with serious illness. Even the most organized families are often unable to cope with the terror that accompanies a disease that cannot even be mentioned. What with running from hospital to job and back home for a quick shower, preparing a routine supper is the last thing on the mind of the hitherto organized mother. Meals will often consist of a bag of chips and a coke.

But meals, during this trying time, are vital. The family needs the nutrition to keep them going. They need the emotional strength that a good meal   provides. And, most of all, they need someone who will smile, ask them how they’re doing, offer good advice spiced with a hug as she places tray after tray of delicious smelling food on the counter.
Ditza works as hard as she can coordinating this immense project which provides 1,200 hot meals and 1,500 sandwiches every week. But ultimately, she is dependent on her volunteers who package and deliver the meals. That’s why she was devastated when a volunteer of twenty years retired.   She recruited another who couldn’t handle the pain she saw each day and left after two weeks. Then another who didn’t even last that long.    She was at her wits end.  Then the phone rang. Or was it a dream? The caller wanted to volunteer. She lives right near the hospital, has a car available, wanted the very day that Ditza needed and understood   the nature of the work.

Another ‘note from heaven’: Hundreds of sandwiches are distributed each day in the hospital emergency rooms at midnight to families waiting hours and hours subsisting on nothing more than worry and fear. One day, a miscommunication resulted in a major shortage of rolls. But not for long.  Almost immediately after the shortage was noted, a call came in. A woman had mistakenly ordered 80 extra rolls for a simcha. Can Lottie’s Kitchen use them?

Time and time again, Lottie’s Kitchen receives letters effusive in their gratitude saying, “We never could have made it through our crisis without you!”   In constant contact with the family during their most vulnerable moments, Lottie’s Kitchen becomes a friend. No.  More than a friend.   A big sister. A mentor. Someone to hold their trembling hand. When a need arises, they feel comfortable asking. Why would anyone feel uncomfortable turning to a big sister? And so a mother contacted the office. Her daughter had turned twelve six months ago. At that time, with Abba’s life in jeopardy, there was no emotional space to think of a Bas Mitzvah. But now? Abba is still very ill but things are looking up. Could Lottie’s Kitchen perhaps help in making a party? Lottie’s Kitchen does not do things halfway. This family could use a boost to their spirits. A gala event was prepared. A full program to make every heart smile, a lovely set of jewelry as a gift to the Bas Mitzvah girl and a magnificent food and cake bar, all coordinated and donated by Lottie’s Kitchen volunteers.

The need is great. Lottie’s Kitchen has countless families on their rosters. But too many are still on the waiting list.  Sometimes, it‘s Mommy who is ill. Sometimes Mommy is spending Shabbos at the hospital with a tiny child or perhaps with her husband, whispering t’hillim for hours and praying that her children should have a father
Every Friday night, in every Jewish home, a platter of roast chicken appears on the table and the cholent can be heard bubbling in the crockpot. We take it for granted. It always was and it always will be. Until one week when it isn’t. No mouth-watering aromas emanating from the kitchen. No Mommy standing quietly by the flickering candles, praying for those she loves.  Where is Mommy? The mainstay of the home? The creator of the Shabbos atmosphere? Mommy is in the hospital, undergoing chemo. And even though the clock reads past the time for sunset, Shabbos, as the family knows it, had not yet entered their home. Grandma lives miles away in California and Abba, utterly devastated by recent events, is hardly functioning. Ten-year-old Chavi spreads peanut butter on bread to feed herself and her siblings. 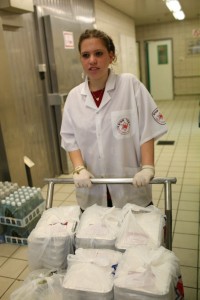 Shabbos food would provide so much more than nutrition. Its aromas would enable the home to, once again, be pervaded with hope. The family would be enveloped by an all-encompassing feeling of belonging to the Jewish people, of being loved by their Creator. Smiles would appear on faces that hadn’t smiled in days.  When Shabbos would depart, it would leave its gifts of Courage and Faith.
But there was no Shabbos food. And the home was filled with Melancholy and Despair.
Within a few weeks this home, too, would be added to the Lottie’s Kitchen List. How? Because of the generous contributions of compassionate people like you.
Unlike in the United States, Israel’s nursing staff does not provide non-medical care. It is essential that a family member be there at all times to offer the drink, the pillow, the extra blanket and to hold the patients’ hands, giving them the love and caring that can make all the difference on the road to recovery.
And the caretakers? Spending hour after draining hour at the hospital bedside. Who will take care of them? Enter Lottie’s Kitchen.  Its army of volunteers provide attractive, nutritious meals to be delivered by another fleet of volunteers together with a sympathetic arm around the shoulder and sound advice.

It was erev Shabbos when an elderly mother went for a trip with her daughter and son-in-law…
Road accident. The grandmother was killed instantly, the daughter and son-in-law were very seriously hurt, hospitalized out there in the Nahariya hospital.
Tragic. A simple car ride and life will never be the same. People were in shock. But shock was a luxury that those at Lottie’s Kitchen could not be afford at the time. Things were needed. Crying would have to wait.  The most urgent need was food for those that will be sitting with the patients.
Now it was erev Shabbos. Soon the siren would sound. Would there be food for those distraught relatives who were already emotionally drained by the trauma?
Because of all of you, our friends and supporters who have donated so generously, there was.

The work at Lottie’s Kitchen is difficult but so satisfying. Volunteers rarely cancel. Every week, when the food is ready and packaged, a post goes out for volunteers to pick up and deliver. Within minutes, each area is covered.  In fact, some areas never even get posted at the request of the volunteers who handle them each week. They wouldn’t want someone else to take “their” route away from them.  The Bucharim area in Geula is a good example. That neighborhood is characterized by heavy traffic, lots of pedestrians and is difficult to navigate by car. And yet, every single week, the same volunteer insists on delivering food to that area. The kids know him already and wait outside to watch for his car. He is the sunshine in their lives. And so each week, he makes his way through squealing children, beeping horns and standstill traffic. But this time it was too much. He had had a long, hard day at work and decided that he was no longer capable of keeping up with this mitzvah. Tonight would be his last night. It was a firm decision. But… one that was soon overturned by a tiny pre-schooler. As our volunteer neared the door to his next delivery, he heard a little voice through the door. “Lottie’s Kitchen is like our Mommy now. They make us such good suppers and they take care of us. Mommy, when is the Lottie’s Kitchen supper coming? I’m so-o-o-o hungry!”  All thoughts of quitting flew out of his head as he knocked on the door with his box of nutrition for the body and comfort for the soul.

If a normal week can be hectic, Erev Pesach can be frenzied. Hundreds of families need deliveries. Countless volunteers are needed, volunteers who are extremely pressured with their own things-to-do list. The postings went out and within twenty minutes, all were filled and volunteers began to arrive. Two from the left. Three from the right. Each anxious to help but each worried that time was slipping away with so much yet to accomplish for his own family. Two weeks ago, one volunteer had purchased a new car. A beautiful car! It gave him a good feeling each time he passed it in his driveway. He hadn’t begun to use it yet but now his old one was unavailable. “What better way of inaugurating it then with a mitzvah,” he said to himself. He began to load it with his boxes to be delivered, enjoying each inch of its sleek exterior. Until…bump! Another volunteer had just pulled up and accidentally hit the new vehicle. The second volunteer was horrified and immediately exited his car to provide his insurance info amid a flurry of apologies. “I’m so sorry. My insurance will pay for it, of course, but what can I do to make it up to you? Please tell me what you need. I feel so bad!”
Suddenly the car’s importance began to shrink in the eyes of its owner.  He began to see it differently – as a convenient means of transportation, nothing more.

“You and I are both here to pick up food to deliver to families who don’t have the very basics that they need. They are even unsure of the family remaining whole. My new car? Of what significance is it in comparison? The main thing is that we should all be healthy. You and your family. Me and mine. And all the families that we are delivering to.” The man receded and an angel stood in his place, happily loading his new, dented car. Both volunteers continued on their way to deliver joy and comfort to families facing illness and need……
How can Lottie’s Kitchen in Israel provide so much? Only because of its supporters, the Lottie’s Kitchen Family, in America who open up their hearts.  This year’s Lottie’s Kitchen Event will take place on Thursday, July 6 at the magnificent home of Eric and Suzanne Sasson. The demos are super-professional. As heard by many attendees: Each year it gets better and better. July 6—see you there!