It was a stormy night. The wind howled, rain poured down. Inside it was quite stormy also. With nine kids, it often was. She was tired. The clock, her friend, smiled at her and reassured her that in one hour, the kids would be in bed and she could snuggle under her feathery quilt with a cup of tea and the book that had been waiting for her attention for days. Utter bliss after such a hectic day.  The cleanup could wait till tomorrow. 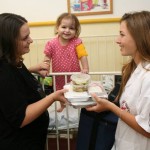 It wasn’t so bad. The laundry was all caught up. The kids had done the supper dishes. Miriam had even scrubbed the pot. She could head for bed with a clear conscience. Ahhh, heaven…

And then the phone rang.

It was Dano, from Ezer Mizion. He was short some volunteers for tonight. The Emergency Rooms at the hospitals were filled to capacity, especially with the inclement weather. Ezer Mizion’s Lottie’s Kitchen delivers sandwiches and snacks to those who are sitting for hours, exhausted, filled with tension, waiting to be seen by a physician. 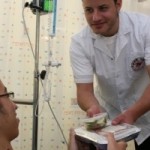 They light up when the Lottie’s Kitchen rep appears, whether it be midnight at the Emergency Room, lunchtime while sitting at the bedside of a hospitalized relative or at home when family routine has fallen apart due to illness.

Fleetingly, she thought of her longed-for early bedtime. But she was a Lottie’s Kitchen volunteer, a soldier in the Ezer Mizion army, which consisted of over 13,000 recruits. She was made of strong stuff. She waved goodbye to her cup of tea and tackled the many chores that awaited a working mother of  nine till the clock would read 11. Then she and her husband would get into their well-worn Suzuki, travel through the storm  to Ezer Mizion, pick up the sandwiches and cakes and deliver them with smiles, with compassion, with love to their fellow Jews.

She, her husband, and the cartons arrived at the emergency room and encountered the local version of World War III. 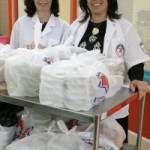 “A catastrophe that you cannot imagine,” she describes. “The pediatric emergency room was packed with screaming kids, collapsing parents, and a devoted but exhausted staff, all trying to cope with General Winter’s mega-weapon – the flu.

As they made their way amid the crowded waiting rooms, the delight of reading under her delicious quilt somehow faded into the background. This was joy! This was satisfaction! This was life!

Oh, yes. She was still tired. Even more so than earlier that evening. As she wobbled down yet another corridor, she commented to her husband, “At least if I faint here, I’ll be in the right place.”

The gratitude of the patients and their families was the vitamin pill that kept her going. They all knew Ezer Mizion’s Lottie’s Kitchen. Most had never been on the receiving end before and were overwhelmed the gesture. “You can’t understand what this means.

I haven’t had anything to eat since early afternoon. My hands are shaking. I can hardy hold my baby, let alone think straight as to what I have to ask the doctor when it’s finally my turn,”  said a distraught young mother.

It was at the last waiting room that it happened. She gave a sandwich to a secular woman, obviously new to the country. The lady thanked her and she offered a Danish to the husband and asked if she could be of help in any way. “Do you get paid commission for each item you sell?” the lady laughingly asked.

She just stood there gaping. She was shocked. She couldn’t speak.

But others spoke for her.

“She gets paid from her communications job during the day. This is a volunteer service, “said a mother who worked in the same office as she.

“She has nine kids and must be exhausted,” said a former neighbor.

“There’s no charge for the food. This is pure chessed.”

“Her only payment will be in the next world.”

“My cousin volunteers in Lottie’s Kitchen. They make delicious meals for families dealing with illness and they’re so careful to make it look nice also.”

“In America, a patient can stay in the hospital alone, but in Israel, a companion is a must. I spent two weeks in the hospital with my mother. I never would have made it through without Lottie’s Kitchen!”

“And every single one of the volunteers is as nice as this young lady!”

“Do you mean she is here after midnight after working during the day plus taking care of nine kids and she doesn’t get paid??!”

“And all this food doesn’t cost us anything. They even give out whole meals during the day??!” the husband chimed in.

“We have to tell our friends about this. It’s incredible!”

And then the waiting room suddenly exploded into applause. Every person there clapped and clapped. A doctor who witnesses the Lottie’s Kitchen angels every single night joined in. A maintenance crew member leaned his mop against the wall and clapped with all his might. Only in Israel!   Her face turned purple but she knew the applause was not really for her. It was for Ezer Mizion’s Lottie’s Kitchen and its thousands of volunteers plus all of you out there who support Lottie’s Kitchen with your generous gifts so that 4000 meals and snacks can be disbursed every single week. 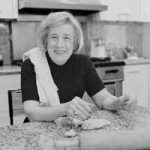 She stood there feeling so humbled, so overwhelmed and so grateful to be a soldier in the Lottie’s Kitchen army.

Founded in memory of Lottie and Haim Chalom by their four daughters, Lottie’s Kitchen in Israel provides annually:

Ø  2,160 food baskets for Shabbath to families

Ø  81,600 sandwiches to fuel people staying with their loved one in the hospital or clinic

Ø  48,000 portions of cake and hot drinks for people at hospital outpatient clinics

This year’s Lottie’s Kitchen Event  on behalf of Lottie’s Kitchen in Israel will take place on July 11 at the home of Adele and Jody Laboz in Deal NJ.  Professional food demonstrations will send each guest scurrying back to her kitchen to duplicate the mouth-watering gourmet cuisine. The Kitchen Boutique will feature the newest in kitchen gadgetry. Guests will vie with each other for the fantastic prizes of the Chinese Auction. Photography by Susan Menashe will once again draw the crowds as proud Mommies bring their offspring to Susan for professional portraits to send to doting grandparents. Susan will be available both on the day of the event and on the day before to accommodate the crowds.

Lottie’s Kitchen Event… the Highlight of the Summer! A Dream Day Not to be Missed!

Thursday, July 11th …See you there!