When Major Maor Cohen drags in his Lego suitcase, the children’s eyes instantly light up. “The Lego Man is here!” For three years now, he has been roving from hospital to hospital. When he gets there, he gathers the children around him – many of them groaning from post-operative pains, knocked out by chemotherapy, or drained by illness – and builds Lego models with them. 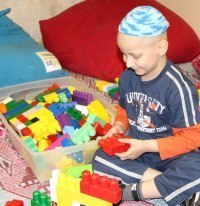 Cohen (33) is a resident of Givatayim,. Two weeks ago, he and his wife finally had their first child, a girl. “I love kids. Lego was my way of connecting to them. I’ve been a lego fan since I was four. My aunt brought me an airport kit as a gift. I took the kit into my bed – and haven’t left the Lego alone since.”

To date, he has built more than 3,000 models.  “I’ll always be a kid. I love sitting in the middle of a circle of kids and joining their world.”

Maor leads a two-hour workshop  once a week at Ezer Mizion’s Donald Berman Rehabilitation Center for Cancer Patients. At first, only three children hesitantly showed up, but slowly but surely, the workshop’s reputation spread. Today, 30 enthusiastic participants, ages three and a half to teenagers, attend regularly. The Lego kits are funded by donations. “These are two weekly hours of refuge from reality. The children wait all week for it. The most popular model for these kids who are fighting a major battle for their lives is the knights’ castle, and in my opinion, that says a lot.”

Cohen is especially moved when a child gets out of bed and comes to the workshop after a long period of dejection. “Lego seems to rouse renewed hope. There was one boy who woke up from brain surgery and the first thing he asked was, “Where is the Lego man? He promised he would come.” His father called me excitedly and within 40 minutes I was at his bedside (pauses, choked up). “There was another child who had to fast for many hours before a critical test. He was also swollen from huge doses of steroids. His parents were afraid he wouldn’t be able to take the discomfort and the hunger. But when I came, he was swept up in the Lego creations with me and did not notice the passing time. Everyone around cried from joy.”

So this toy also has a healing element?

“There are some children whose illness affects their motor abilities, but they won’t give up. They sit and work on a model for weeks at a time. Sadly, there are some who don’t make it, in spite of their courageous battle. Some time ago, a very sweet little boy died. I still have a photograph of him with the model he built at the workshop. There was a girl who passed away, and her mother asked me to finish off the model she did not live to complete. Another mother said to me: “Cancer tore our family apart – and the Lego put it back together again.”

Cohen’s great dream is to build his own children a big castle in the yard, made completely of Lego, at least 40,000 pieces. “I’m looking forward to bringing my new daughter into the world of Lego. Do you think 2 weeks is too early to start??

Mazel Tov, Major Maor Cohen! May your new daughter absorb your values and someday create with you a Cohen & Cohen Lego Team, bringing joy to those who need it most.