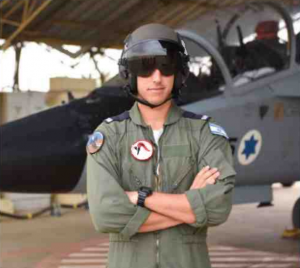 Lieutenant T. just received his Pilot Wings and yes, he is quite proud. At the young age of 23, he has accomplished even much more. Lieutenant T. has saved a life.  During the course, he was called out by the Division Officer. “Did I do something wrong?” His mind was in a turmoil with all sorts of negative scenarios running through his head until the officer smiled at him saying, “Ezer Mizion would like to speak with you. It seems that you are a possible genetic match for a leukemia patient.”
“What an about face! Suddenly I was a potential hero!”
“It turned out I was a great match for a lady with cancer.  I checked it out with my parents. After all, it was a big step.  They were 100% on board and excited that I had been given this opportunity.  And so the light turned green and it was all systems go. I took off a few days to have the injections that they give you to increase the stem cells in your blood. And then came the big day. Perfectly comfortable with reading material and visitors,  to occupy me as blood was removed via one arm, stem cells separated and blood then returned to me via the other arm. It took several hours but was painless and I felt fine.  It is definitely a great privilege to take part in such a process.
Anyone who is contemplating donating should know that it’s simple. Nothing to worry about. Within a day or so, you’ll be back at work and soon will have forgotten all about it. But I can tell you from experience that on the other side, no one is forgetting anything. They’re ecstatic with joy as your stem cells seep into your patient’s bloodstream. And they never forget. Not days later, not weeks later, not even years later.
About a year after the transplant, when it was legal to do so, I received a letter from a lady in America. She introduced herself as the one who received my stem cells. She said she is in her fifties and has three kids. She had had leukemia and needed that transplant to stay alive. I couldn’t believe what I had accomplished! Just minimal discomfort on my side but for Nancy. I had given her back her life.
She invited me to come visit her in the US and I invited her to visit me in Israel. So far, neither has happened but we both hope someday… Meanwhile, we’re getting to know each other via email.   My message today is unequivocal: Give! Donate! There are so many still waiting in line. Subsidizing the cost of the genetic testing or getting tested yourself or both. It’s such an infinitesimal effort, compared to what you are granting them.