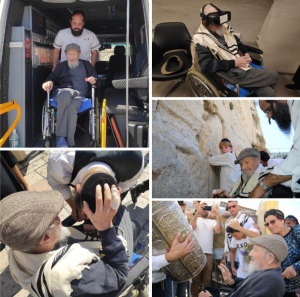 Reb Aharon is a 106 year old holocaust survivor. Many years ago, he underwent, like so many others, traumatic experiences that no human being should know of. Yet he remained strong and built a religious life for himself. Those of us who did not live through the holocaust cannot fathom the strength it took to do so. And now he asked for a bit of help from us. It had been so long since he visited the kotel. He yearned to touch its precious stones once again. Would it at all be possible? As part of Ezer Mizion One Wish program for holocaust survivors, problems, one after the other, were solved and, like a dream, there he was.  He was trembling with emotion as he, a Kohen (priest), blessed his family members there at his beloved Wall. May G-d…… the words seemed to float in the pure, holy air surrounding the Western Wall. Reb Aharon had come home.
For other survivors, lowered cognitive   levels did not allow them to choose a favorite activity for their wish. Other ways of bringing them to greater awareness of their surroundings had to be found. A medical clown  was invited to visit the home. Their increased focus, their happy smiles were evidence of a very successful performance.


Still others, a group of animal lovers, were treated to a show starring Ezer Mizion’s therapy dogs. The seniors played with the dogs, stroked them, fed them, and enjoyed watching them do tricks. They were engaged! For some, it seemed almost miraculous. One step forwards out of the tunnel of confusion and non-awareness that they had been living in.
Ziniada lived in the nursing home 24/7. Imagine her joy when she was treated to a trip to one of her favorites from a lifetime ago, Big Fashion Mall in Ashdod.

Moshe of Givatayim was turning 101 years old! His body may not be as mobile as in his younger years but his mind was sharp and lucid and he was much loved by his family and fellow residents. His daughter asked that he be treated to a birthday party together with his friends at the home. The atmosphere was electric!  The singing emotive! The deep joy gratifying! And Moshe was showered by blessings by those who loved him.
One of the many thank you notes from a daughter who accompanied her father on a One Wish trip:
Dear Adi and Ora❤❤🌺,
I took the sticker off his jacket and put it straight on the photo (that hangs on my refrigerator.
I am speechless. Any thanks I express will not come close by any measure to what I experienced and felt today. You excited us as much as a cruise around the world on a luxury liner would have (a cruise doesn’t even come close!)… Today, thanks to you, I experienced something wonderful that will stay with me forever…
Thank you! 🌻🙏❣
You do holy work! 🎈🎈🎈
All strength to you!! 🙏🙏🙏