“Last January was a very busy month for my husband, Dudi. He is manager of a software company, a job that keeps him busy every moment. He didn’t feel well, as if he had a lingering flu, but he simply didn’t have time to be sick. When the workload abated a bit, he took two days vacation, but he still didn’t feel any better.

At that time, swine flu was going around the country, so I asked him to go for a check-up and get some medication. On Friday, he finally went to the doctor. The doctor said he did not see anything, but since the symptoms were going on for such a long time, and since no lab tests are processed at the clinic on Fridays, he referred us to the Emergency Room for a blood test. We were absolutely relaxed about it. I dropped Dudi off at Tel Hashomer Hospital and continued home to Tel Aviv to pick up the girls. I had just had time to pick up Lior, our oldest daughter, when Dudi called and said, “Nu, when are you coming?” It was his voice. 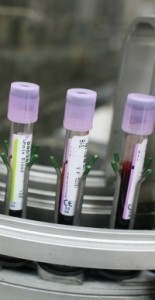 Not the casual Dudi that I know.  I immediately understood that something was very wrong and I flew to the hospital. The results had come in fast. And they were not good. Leukemia. I stood there stupefied. Leukemia doesn’t happen. Not to us. Maybe others but not us. Later I would discover that is how everyone-all the others- also felt when they heard the news about their own diagnosis. I couldn’t speak.  But then I found my voice. “We’re strong and we’ll get through this,” I assured him although my knees were shaking with terror.
Dudi spent that Shabbat in the hemato-oncology ward. In the morning, I brought the girls to the hospital and told them the truth about what their father had. Seven-year-old Lior asked, “Is Abba going to die?” I grabbed hold of  a chair to steady myself. I didn’t feel older than seven myself. Yet I had to be the strong one.
For several months, Dudi underwent chemotherapy treatments but it wasn’t enough.  A bone marrow transplant was needed to save his life and a genetic match was essential.
Immediate family was checked.                                No match.
It was a tough moment, frightening and shattering. But then we heard about Ezer Mizion’s Bone Marrow Donor Registry. I remembered all the advertisements I had seen in the past that “We’re looking for a donor for so-and-so’s father…” I hoped we would not be in that place. Will there be a match already on the database? The thought of waiting was terrifying and what if…what if it was not found in time? At the end of a nerve-racking month, we were told that a matching donor was located in the Registry. We were thrilled.

The transplant was successful, and today Dudi is recovering from it. We were so moved that a total stranger agreed to save Dudi’s life. We would very much like to thank him personally when it becomes possible. Words cannot express our thanks to Ezer Mizion for the holy work they do. When an Ezer Mizion volunteer sits with your sick relative or comes by with newspapers and magazines, a hot meal, or just a kind word, it is a huge help. But beyond all this, we owe them Dudi’s life. Without them, our girls may learn to double-jump rope, star in a school play, get an A in a book report, enter high school, start their first job, and walk down the aisle towards marriage…and their father…their father who loves them more than life itself…their father may not have been there to share it all with them. Ezer Mizion, we can never repay you!
Osnat Nir