“My leg hurts,” complained Netanel while playing around with his sister. But his mother hardly paid attention. Her grocery list had to be finished before the store closed. The potatoes had to be peeled if they were to be ready for when her husband would be coming home and the phone was ringing. “Kids!” she thought to herself as assured him it would feel better soon, meanwhile running to grab the phone. 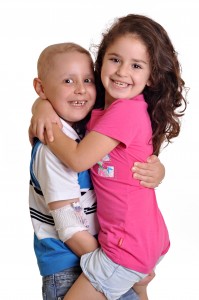 But it didn’t. It got worse.” Could he have sprained it?” she wondered weeks later when he was still complaining. “I’ll bring him to the doctor next week. Maybe he’ll advise us to keep him off his skateboard. That would be a nightmare for him but we may have to do it.”
Unfortunately, another nightmare was in store for 7-year-old Netanel… much worse than being off his skateboard.
The doctor could find nothing wrong with him. But the pains continued. His grandmother decided to take him to Sheba Hospital. Prof. Chaim Kaplinsky would not give up until he had a diagnosis. And when he did,… we almost wished he hadn’t.
“We were young,” says his mother. Certain things were just not in our world…like serious illness.”
Cancer was a word we didn’t mention. We certainly didn’t associate it with a fun-loving seven year old child. But there it was. Leukemia. A monster that arose and threatened to engulf us all in his grisly mouth.
First it was chemo. Then drugs. But the monster still had our child in his grip. A bone marrow transplant was recommended. “Do it!” we almost screamed. “Do it quickly!” The doctor calmed us and explained that a transplant was not a procedure that can be done asap. In order to be successful, a donor with the same genetic makeup had to be found. And that may take time.
Time? Time was our enemy. Our son’s condition was worsening every day.
The search began with family members. No match. Ezer Mizion, the largest Jewish registry in the world was contacted. No match. 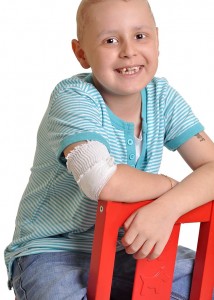 But Ezer Mizion did not give up. They pasted his picture on billboards asking for people to come and register. And come they did. To save the life of a little boy. The lab worked feverishly. Each new registrant was tested, wasting not a moment. The family sat tensely by the phone. And then it rang.
The room could not contain our joy! Ezer Mizion had found a match! Our son would live! Life would not end at seven. He would grow up. He’d marry. We’d become grandparents. The monster had been vanquished.